Note: Back in 2012 I was working in the email space, trying to improve the modern-day-worker’s life (this was before pg’s Frighteningly Ambitious Startup Ideas came out and everyone started talking about email, mind you). Unfortunately we did not succeed (otherwise this blog would be a lot more popular).

Then in mid-2013 I decided to pen down the following thoughts about the space. Again, I failed at predicting the future (shocking), and the change and innovation in the space pretty much fizzled out (it would be an interesting discussion to understand why that happened).

I still believe that the field is ripe for massive change (and I guess I’m not the only one), so I’m reposting my original post here, for eternity.

“email, to me, is the most important app I use”

Someone said this in 1997, but it could’ve well been in 2013. Email has become a central element in our digital lives. Despite all the reports of email’s demise, we’ll see how startups and old dogs are pushing the envelope.

It’s getting hot in here

Email startups became cool around 2007, when Xobni kicked off a mini-revolution. Its Outlook extension quickly garnered a large user base which attracted Bill Gates and Microsoft’s attention and a rumored (rejected) acquisition offer.

Since then, several email startups have popped up and got the tech world’s headlines with their products and/or acquisitions. Yahoo bought xoopit (a social networking service based around email) in 2009, reMail (email search for iPhone) got picked up by Google in early 2010 while Rapportive (rich contact profiles inside Gmail) was acquired by Linkedin just last year. And not long ago, PowerInbox and ActivePath decided to join forces to enrich your email content.

And you know things are heating when you start having conferences around them. Inbox Love had its 2nd edition last year featuring a big number of startups side by side with the established players. Heck, even VCs are jumping in.

Innovation in the email world

There’s a multitude of startups trying to improve our email experience by either extending existing email clients or completely replacing them.

Startups that are trying to extend the email experience are doing so by standing on the shoulders of giants like Gmail and Microsoft Outlook. So what types of products are they building?

Ufff! And it’s not just startups! Concepts like Persona or Reinventing Email are being thrown around and getting a lot of attention (just look at the number of comments in HN [1, 2]).

Creating something totally new is not only more ambitious but also more risky. The most notorious ones have been shut down. Sparrow was acquired by Google. Fluent mysteriously closed during the Summer. And even Thunderbird got downsized by Mozilla.

But that doesn’t mean others are not going to keep fighting. Postbox’s desktop app for Gmail/Mac OS X has received rave reviews. Riparian Data’s work with big data appears to be very promising. And Mail Pilot had a successful kickstarter project with its mission to reimagine email.

Email was not designed to be used the way we use it now. Email is not a messaging protocol. It’s a todo list. Or rather, my inbox is a todo list, and email is the way things get onto it. But it is a disastrously bad todo list.”

And since then, unsurprisingly, there has been a lot of talk to try and “fix email” using the suggested approach.

ActiveInbox has been around for a while, trying to make your inbox your donebox. Previously, Y Combinator had backed Taskforce to help them convert emails into tasks, but the founders have since moved on to Siasto.

There are some new kids on the block: GrexIt, a collaboration system that makes extensive use of gmail’s labels and Taskbox, which turns your inbox into a task list (or as they like to say… a Taskbox).

Even classic task management startups are jumping into the email: Any.DO allows you now to add tasks from Gmail. Orchestra To-do, the App Store's 2011 Productivity App of the Year, is working on a mobile-first email experience from the ground up And we’ve all heard about Mailbox from Orchestra, right?

But how well will they fare against the well-funded Asana, who’s original mission was (apparently) to kill email?

YC is also backing different email startups: Submittable is trying to replace email with a “Dropbox-like solution” while Streak is a CRM in your inbox.

Many of these email startups are building on top of Chrome+Gmail, taking advantage of the OAuth access and targeting the 400+ million user base, many of whom are SMBs using Gmail Apps. Development on top of this platform is strangely popular, considering the huge amount of work it involves. But it seems like a trend that’s going to continue. And expect more from Google, at least according to the words of the CEO: “I could probably give you a list of 10 major things that are wrong with email”.

Microsoft has not seen many startups target its most popular webmail service, Hotmail. Will things change with the new Outlook.com? On the other hand, the desktop counterpart Microsoft Outlook has historically provided an API for “add-ins”. The new Outlook 2013 comes with Office’s new web extension platform, “Agave”, which will allow developers to better target what is probably the most popular email client around.

The previously most popular webmail service, Yahoo Mail, has also not seen much interest from email startups. They’ve presented a redesign of their services at the end of 2012, but with Gmail taking the crown, will that be enough? What will Marissa do?

AOL has been busy with its email service. In late 2010 Project Phoenix was revealed but less than a year later development was halted. It seems like efforts are now concentrated in Alto, a project presented in the second half of 2012.

Facebook’s first move into the email world was through the notorious Project Titan. But what was presented at the time fell short of the expectations. Since then, its messaging service became to resemble more and more an email client, with attachments, @facebook.com addresses and a two panel layout similar to Apple Mail. And during last summer, it switched everyone’s profile to a public @facebook email address. Clearly there are more things up their sleeves.

Powering the backend (also known as “The Arms Dealers”)

Email innovation is not limited to user-facing apps. Action is also happening behind the curtains.

Context.IO provides a REST API for email that makes it easy and fast for developers to connect to a wide variety of email accounts and integrate that data in their application. They’ve been acquired by Return Path, the self-called global leader in email intelligence (and also the buyer of OtherInbox).

Rackspace’s Mailgun (also acquired last year) is like an arms dealer for innovators looking to disrupt the email space.

And for helping companies with their email marketing, there’s MailChimp or Constant Contact, among many others.

The world is going mobile, isn’t it?

Email and Mobile used to mean Blackberry. But today, mobile email is pretty much dominated by Android/Google and iOS/Apple.

With everyone pointing to mobile as the next great battlefield, it’s clear that there is a huge opportunity here. The most known disruption attempts were quickly acqu(h)ired (i.e. reMail and Sparrow).

Email startups have been shy and taking a very conservative approach to mobile. Most are making apps that merely signal their presence in the mobile world. And very few have dared to go mobile first. This might be due to the fact that startups that have plugin products don’t have the same freedom in mobile as they do on the browser. They would have to hack into the mobile email clients to be able to reproduce their functionalities and - more important - their visibility. Porting a product into mobile means a separate app, which means not being immediately present when users check email in their phones.

The great exception is of course Mailbox. In just one week they amassed 150k users and +800k reservations! And their path? From a task management app (Orchestra ToDo) into a mix of email client with task management. By building email client functionalities they overcame some of the problems described before and control the user workflow when checking email. Pundits were quick to suggest that someone should buy them (1, 2). Dropbox listened!

So what’s in the future for email? Interesting things, no doubt about it. 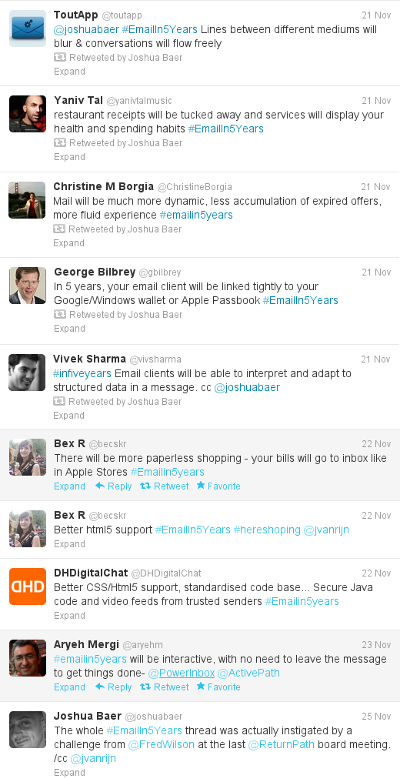